Will Travel for Vegan Food

So, I have some super exciting news! My friend, Kristin Lajeunesse, has just published her long-awaited book!!! It just came out last week, and even though I got a preview copy to read electronically, I was stoked to receive my paper copy in the mail yesterday. 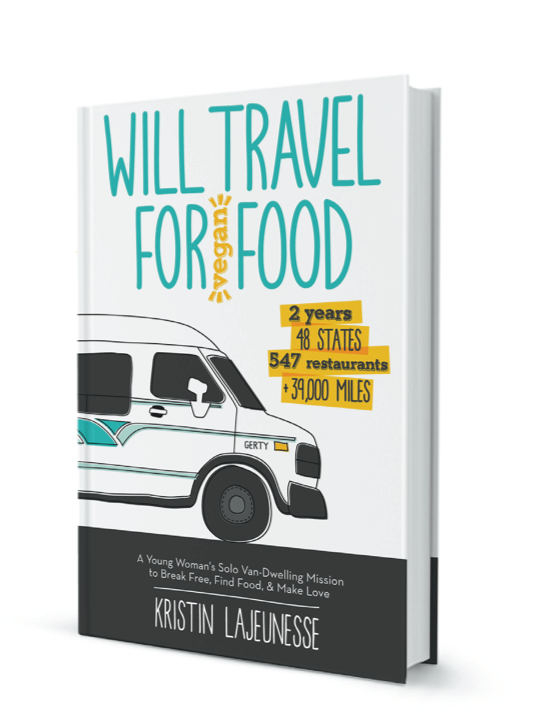 Will Travel for Vegan Food is an awesome memoir of Kristin's adventures around the US, eating the best vegan food, and living the most amazing life.

As many of you know, I may be a little obsessive about planning road trips and annual vacations. Weeks (and sometimes months!) before our departure date, I have been known to spend hours scouring different websites like happycow.org, looking not just for places to eat, but for places I'd want to eat.

Ha. I just realized that my obsession with needing to find great food while traveling may stem back to the summer of 1995.  I was pregnant, and moved from Texas to Maryland by way of a family reunion in Chicago, Il.  Because my car didn't have AC, or working windows, I hitched a ride with my mom and youngest brother, and we piled into her van with two dogs (Lady and Daisy) and my cat (Bear-Bear).  Traveling with the pets in the heat made indoor dining off limits, and even though at the time I was still a vegetarian, not yet a vegan, many fast food options were not options for me.  We ended up eating a lot at Burger King (where I could get a Whopper- minus the meat, which means veggies and cheese on a bun) and Wendy's (where I could get a baked potato).  They were having a Pocahontas movie promotion that summer, as I recall, and  my first Maryland kitchen was stocked with drinking glasses featuring those movie characters.

Anyway, back to present day....many detours have been taken so that we can visit vegan friendly restaurants, and thankfully, my family is super supportive of these jaunts!  It was during the planning of one of these trips many years ago that I stumbled onto Kristin's blog, www.wtfveganfood.com. Kristin was doing what I only dreamed of: traveling and eating at all the vegan restaurants in the contiguous United States. Her blog quickly became one of my top resources. Not only were her reviews spot on (I mean, really. The service at My Thai is STILL slow, but the entrée suggestions perfect), but Kristin had such warmth and honesty, that her passion for her project became compelling to vegans and non-vegans alike. She also conveyed a tremendous amount of fun, posting dance-a-day videos, and other silliness. 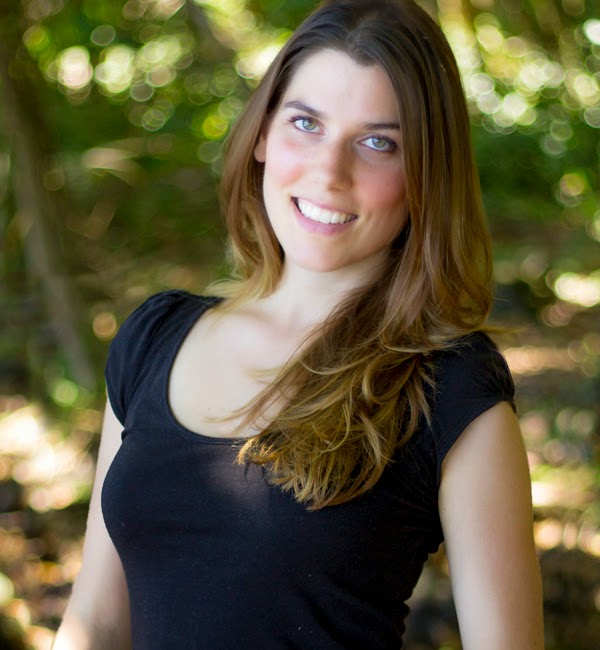 When I was given a preview copy to read, I expected what I knew from the blog, fun, warm, vegan feels. What I read, though, was so much more. In telling the story of her journey, we learn about her amazing entrepreneurial spirit, her struggles, her romantic trysts, her loneliness, her heartbreaks, and the realities of her nomadic dream. She becomes much more than the vegan blogger goddess I'd come to love, in this book she invites you into her soul. In anticipation of her book release, I asked her some questions I thought you, my readers, would be most interested in. Here is what she said:

1. You went from working for a vegan company to creating your own brand, writing a book, and sharing your expertise with other self-starters. What in your life (education, etc.) do you feel has prepared you the most for your entrepreneurship?
Oh wow, what a great question. Hmm... my instinct is that it's been somewhat of a built-in mechanism. I always knew I wanted to work for myself and my Dad has been a lifelong self-employed entrepreneurs so I had a great role model growing up. At the end of the day I suppose it's my supportive family and friends that have encouraged me along the way, in addition to a deep intuitive 'knowing' that being self-employed is where my heart is.
2. When did the book idea become a reality?
About a year into my road trip I got a call from an acquaintance in Boston. He said he wanted to talk to me about a business venture. A few more phone calls and emails later and I was signed as one of the first authors to a company he and his wife were starting: Vegan Publishers. Then, shortly after my trip ended (in August 2013) I began working on the outline of the book. I finished writing it in October 2014 and since then we've been going through the editing, reviewing, and printing stages. I can't believe it's *finally* ready! :)
3. How do you fund all of your travels?
I used 100% of my personal savings, paired with a successful Kickstarter.com campaign, and then the continued support of a few donors that helped keep me going. I lived entirely off of donations and my savings, for the full 2 years.
4. Where were your top 5 vegan restaurant experiences?
Vedge (Philadelphia), Portobello (Portland, OR), Imagine Vegan Cafe (Memphis, TN), Thanks Jordan Cafe (Lockport, IL), and Shojin (Los Angeles)
5. Do you cook? What is your favorite vegan dish to make?
Not really. But my favorite thing to make is my breakfast smoothie. It's comprised of frozen blueberries, strawberries, and mangoes; spinach, almond butter, chia seeds, dates, cacao nibs, and SunWarrior raw vegan vanilla protein powder. I usually serve it layered with banana rounds and hemp granola.
6. How did you keep in shape while traveling and eating all the decadent vegan noms?
I didn't! Haha.. by the end of the first year I'd gained 25lbs. I ate anything and everything that was vegan. Which often included sweets.
7. What's next for you?
I've dedicated 2015 to the promotion of the book, while hunkering down here in Chicago. Though I'll be traveling quite a bit in May and June to speak at veggie events around the country. Then I'll go on book tour in late summer/fall. In February of 2016 I'm co-hosting a Lifestyle retreat in Nicaragua with my friend Grace Van Berkum. She'll be leading the group through daily yoga and raw food prep classes while I take the group through business and entrepreneurship classes. Then, I'm hoping to spend much of 2016 traveling the globe, reporting on vegan finds via video instead of written blog form.

I'd love to recommend this book to you. It's not just for vegans, it is for any self-starter, anyone with a dream. In addition, I'd like to offer a giveaway! Kristin sent me a box of goodies, including some bumper stickers, water bottles, and some awesome iPhone bamboo cases. Head on over to my facebook page www.facebook.com/zuzubeat and leave a comment below this blog post telling me YOUR vegan dream, and I'll pick my three favorite answers to receive some Will Travel for Vegan Food swag!!! Post before midnight, EST on Friday, May 1, 2015 for a chance to win.

And here's a link to order the book! I promise you'll love it! I did!